Arizona is the dream location for quail lovers!  We enjoy four of the six huntable species of quail that are found in North America.  In addition to those four species, Arizona is lucky enough to still have the Masked Bobwhite Quail, and has hopes of
​one day re-intoducing that bird back across the state!

The most well known of the "desert quail", Gambel's are quickly identified by the topknot found atop the head of both males and females.  Located in dry regions of the southwestern United States, Gambel's quail thrive in the dry-arid regions that contain an abundance of desert shrubs. Coveys of Gambel's are more apt to run than fly!  They also hold better for hunting dogs once the covey has split up. 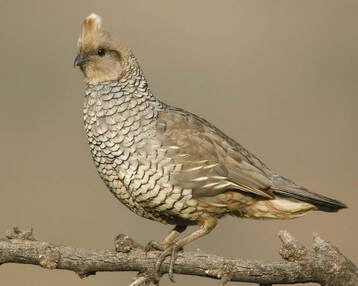 Also known as Blue Quail, Scaled Quail are known  for their head with a crested tip of white and their blue scaled appearance.
The scaled quail is found in arid grassland and desert shrub areas in the southern and western parts of the United States. In Arizona, they seem to favor grasslands with pinyon & juniper trees for cover. 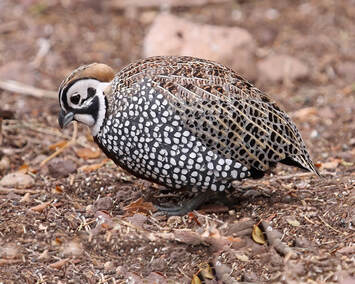 With the smallest range in the United States, the Mearns quail is found primarily in Arizona, but also in small pockets of Texas and New Mexico. They live in mountain areas populated with oak and juniper trees as well as grasslands. Often referred to as Montezuma Quail, they have a a unique coloration of feathers which aids them in hiding from predators. 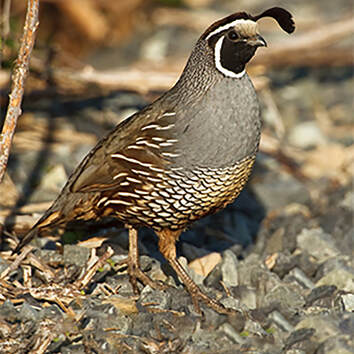 The California Quail, also known as the Valley Quail, covers the largest range of any western quail. California Quail cover parts of Arizona, California, Oregon, Washington, and even into Idaho, Nevada, and Utah. These birds tend to roost in trees and can form large coveys with hundreds of birds. These quail can be found in foothills, valleys with grassland, moist chaparral, and areas with scattered trees. 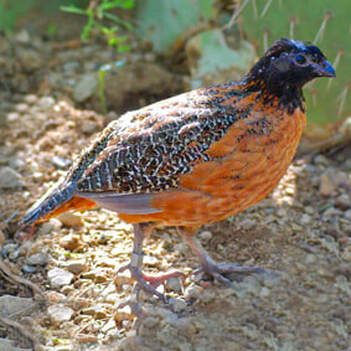 Discovered in Arizona in the 1860's, but due to the introduction of grazing cattle accompanied by fire suppression, the masked bobwhite virtually disappeared in the early 1900's.  It was then placed on the Endangered Species list. The Buenos Aires National Wildlife Refuge in southern Arizona is the only verifiable site to see these birds and with the Refuge's efforts, there may come a time in the near future where these cool birds may make a comeback by being reintroduced again across the southwest.

Quail are birds that are typically found in small flocks, otherwise known as "coveys." In late spring and early summer, coveys begin to break up as pair bonds form between individual males and females prior to the breeding season. Quail spend most of their lives in a relatively small area, with groups of 8 to 25 birds common in a single covey. Flight speed of most quail is 30 to 40 mph.

Quail generally forage twice a day, in early morning and mid-to-late afternoon. Quail eat a wide variety of foods including insects, seeds, leaves, and berries. Young quail also feed very heavily on insects, gradually shifting to a greater proportion of seeds as they near adult size.

Rarely, if ever, does a quail die of old age. In fact, the average life span is less than 1 year. Quail are a prey species and face major sources of mortality beginning the day it is laid in the nest as an egg. On average, 70 percent to 80 percent of the nation's quail population is lost each year; this high mortality rate is off-set by large broods of wild quail. ​
Valley of the Sun Quail Forever Chapter Phoenix, AZ
Copyrighted © All rights reserved. 2023
Webmaster:  AJ Murosky
Proudly powered by Weebly